I am still trying to recover my equilibrium after China. Still feel a bit seasick at times, which I guess is lingering jet lag, from the 14 and 12 hour trips “through the vacuum tube” as Gus called it.

Here a couple more images from my Nikon coolpix camera. Every time I use it, it’s like the very first time. When I try to download the pictures I never can find the right cable. I never can remember how to get the pictures to a place where I can edit them. I give up. I’m old, okay?

This one is from the very first day with Zhang Lin out on an island in the mouth of the Yangzte River. We saw 70+ birds, about 60 of them life birds for me. And within two years this fabulous, primeval place will be another manufacturing wasteland, belching smog, unabated. 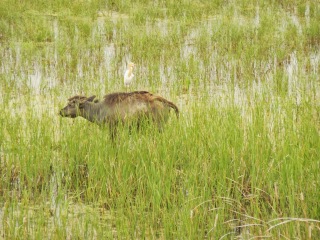 water buffalo with its very own cattle egret

These next two are from the Jing’an Temple in Shanghai. 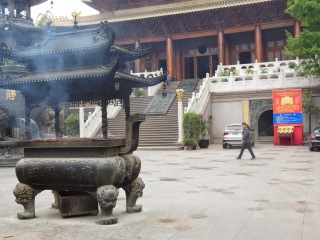 This last one is an example of “South Korean Fashion,” a term Gus used. I asked him before I left, “How do people dress?” I was wondering whether everyone wore jeans, like here, whether I’d be out of place and should bring a dress. His answer: “They dress like escapees from a lunatic asylum.” When pressed he said it was South Korean fashion. I really wanted to take more pictures of it, but I was afraid of offending them, although Gus says the Chinese are completely un-self-conscious about it, since they are always taking pictures of everything themselves.

But SKF also includes tiny little skirts with tights, I mean up to the ass, and lots of metallic gold and silver footwear with huge wedgy soles, for both boys and girls, and Hello Kitty kind of cartoon characters but a little bit more anime  than that, and long filmy sleeveless wraps over the teensy skirts. For guys the most advanced fashion is a kind of ninja look, black tight pants with black flowing shirts and studs and boots. 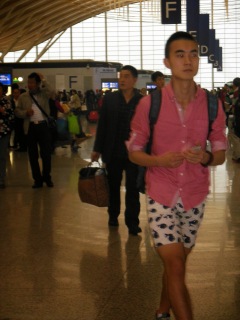 This has been a strange year so far. I don’t even remember what I’ve read, and I never chose the Dibby Hill Awards for 2014. But I’ll make a stab at getting back on my mental feet by trying to reconstruct 2015 at least.

4. The Paying Guests, Sarah Waters
1-3. A Discovery of Witches, Shadow of Night, The Book of Life, Deborah Harkness