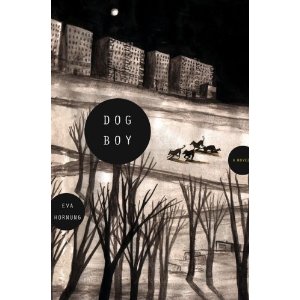 I finished Dog Boy by Eva Hornung last night about midnight, with a gasp. Literally.

Dog Boy is a stunning novel about a four-year-old boy in late 20th century Moscow, abandoned by first his mother, then his alcoholic uncle, as their apartment building on the outskirts of the city is abandoned. Romochko ventures out after all the food he can find is gone, but he’s afraid to speak to anyone, having been warned by both mother and uncle that he must never, ever, speak to a stranger.

So, avoiding humans, nearly freezing on a warm grate, he sees a dog who looks friendly and follows her back to her lair, where she lives with her mate, their grown pups, and a new litter of puppies, with whom he suckles. For three winters Romochko lives with the dogs, as a dog, when the temperature drops to 30 below, fighting off starving wolves, The Strangers, during one particularly bitter spell. And three idyllic summers, eating rats, garbage, dodging police, stealing, begging, and playing in the lair. Until, things get ugly.

One “reviewer” on Amazon said that once you get past this utter improbability, it’s a good book. However, the story is based on a real case in Moscow of Ivan Mishukov, who lived with a pack of dogs for a period of two years before being discovered in the late 1990s at age six. 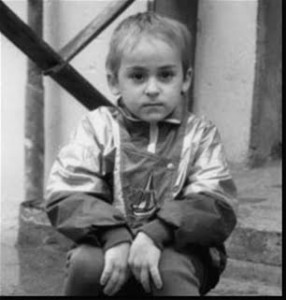 Hornung also tips her pen to Romulus and Remus, with Romochko’s name and the name of the kind woman at the restaurant who feeds them, Laurentia, the wife of the shepherd who “rescued” the twin founders of Rome.

The last two sentences of this novel are devastating and I’ve not been able to stop thinking about them since I closed the book last night. They were in my dreams, in my gut today, like an incipient plunge into clinical depression or grieving for someone I’d forgotten, until I remembered.

I know. This doesn’t make you want to read this book if you haven’t, but it’s wonderful. Worth the pain and the conflict. And some of it was almost inevitable, fiction being what it is, but the last two lines…

This was definitely foreshadowed, mother dog modeled the behavior. Humans, from Mowgli to Lord Greystock are drawn to their own kind–like seeks like. There’s even a singing woman, like the singing girl at the well who drew Mowgli out of the jungle.

The act in the last two sentences was a combination of human ruthlessness with canine pragmatism. And in a way, expressed hope for the boy, that he had chosen to become human, and knew that if any of his canine family remained, he couldn’t. But the clueless academics who have “saved” him from his canine family, when they come into the room and see what he has done, what will they do? And when, if, he becomes human, how will he, how can he, cope with what he did? And of course, the question that reverberates through the whole novel is, which family is kinder, more loyal, more admirable? The answer to that is very clear: the dogs.

All of us who love dogs, and especially if we’ve worked with them at all as a team, know that’s true. Human complexity and moral ambivalence and cruelty are all absent from the dog mind. This novel captured that so utterly, without sentimentality, without animated butterflies. This family lived a hard life, scraping a living any way they could, they fought, and squabbled and nipped at each other, observed rigid hierarchical patterns, and still managed to stay loving, loyal, and uncritical. Would that I could even get through one day, one hour, with that purity.